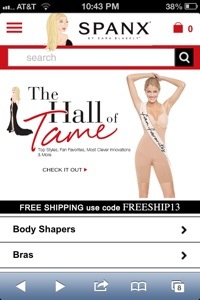 The model on Spanx’s website does not look like she needs Spanx. But maybe she doesn’t look like she needs Spanx because Spanx work. Underneath that nude-color modern version of a chastity belt, she’s a normal sized woman with a belly.
Have you seen the fit, tiny woman at the salad bar while you were waiting in line for a cheeseburger? Did you think, ‘she doesn’t even need to eat rabbit food yet there she is’? That’s why she looks like that. Because she eats salad.
Same thing.
Back to Spanx. They have those for men. But I’ll bet they don’t sell very well. And I blame women (many of whom are probably wearing Spanx). Women will not judge a man with a belly. There is no detectable correlation between the flabbiness of dudes and their ability to pick up chicks. I saw a sexy, curvy woman (again, probably wearing Spanx) with a dude who hasn’t seen his own toes in years. Maybe it’s because underneath her Spanx is a thick later of insecurity. They should make Spanx that push and squeeze and reshape a woman’s self image.
Truth is, though, if you are a woman reading this I want you to know that you are already beautiful outside and inside. You always have been. You do not need Spanx, though I appreciate how your Spanx make you look in the same way I appreciate a nice pair of heels or a push up bra. Or sautéed mushrooms on a good steak.
As for the fellas, I would prefer if you did throw on some ManSpanx. Just so I’m not so confused as to why you’re walking around with a swimsuit model.